Atomberg Technologies is a VC backed company started by a group of IIT & IIM Graduates. Atomberg believes that Indian Consumers deserve better and hence have entered the space of building Smart & Energy Efficient appliances that stand upto the global standards. Atomberg Renesa+ is based on BLDC technology which stands for brushless Direct Current Technology. The fans can be connected to the regular AC supply that is distributed in Major Indian households; however, the fan internally runs of 24V DC. Due to the use of BLDC Technology the fans consume only 28W on the highest speed & as low as approximately 6W on the lowest speed. Compared to an ordinary Induction based Ceiling fan, Atomberg Renesa+ can save up-to ₹ 1500/ Year on your electricity bills. Atomberg Renesa+ runs 3 Times longer on an inverter battery when you compare it to an ordinary Induction Based Ceiling Fan. The fans run at a consistent speed even in case of a major voltage fluctuation range from 140V-285V. The fans are constructed from an Aluminum Alloy which makes the fans & the blades rust free. The fan has an OakWood Finish, which is DUST resistant and prevents the dust to stick on to the blades. The motor used in Atomberg Renesa+ is one of the most compact motors, which increases the span of the blades, which results in a wider air spread & better air delivery. The design of the blades is to give it a modern, royal & sleek look and feel. Atomberg Renesa+ ceiling fans are controlled with a smart remote which has features like Boost mode, Sleep Mode & Timer Mode. Boost mode enables the highest speed of the fan, the fan speed is reduced by 1 Step every 2 Hours when you use the Boost Mode, the timer is an OFF timer, which turns the fan OFF after set number of hours. The bearing used in Atomberg fans is a Z+ Shielded double ball bearing, Atomberg Renesa+ 1200MM fans can be used in Luxury living rooms, large rooms, bedrooms, Children’s bedroom inside your homes. The motor has no humming noise. Atomberg Renesa+ also have speed indication LED lamps that can also be used as a night lamp. 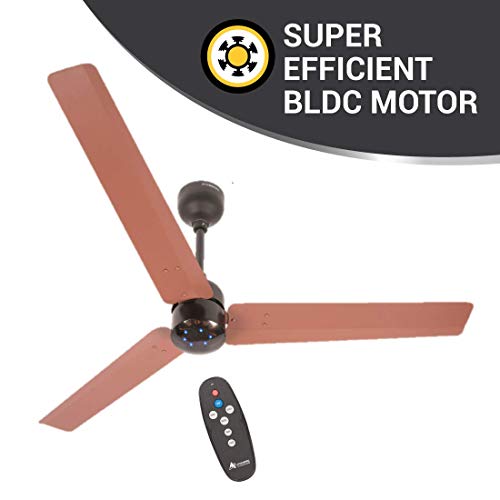